Kilrush Community Development Limited (KCDL) was a local community group formed in Kilrush in the 1980s and comprising of community minded professional people from the town, and descendants of Scattery Island, with the aim of promoting development in the community at the time.

During this period Scattery Island had become the property of foreign owners, the Moorkens family of Belgium. In 1988 KCDL approached the Moorkens family with a view to securing the island back into Irish state ownership. This was a matter of urgency, as the Moorkens family had placed the island with a firm of Estate Agents in Hamburg and it was going up for public auction. Two members of KCDL flew to Belgium, Michael Nolan and Canon Peter Ryan, and engaged in lengthy and delicate negotiations with the Moorkens family. The spiritual influence allowed these negotiations to advance to the stage of an agreement being reached. Under the flag of KCDL, the diocese, along with support from Shannon Development, and the Minister of State at the time (Mr. Noel Tracey) at the Dept. of Finance with responsibility for the OPW, Scattery Island was vested back to the Irish people. A memorial to the sea men who had lost their lives at sea was also a condition of the sale, which went through in 1989.

This memorial can be seen on the Island today: 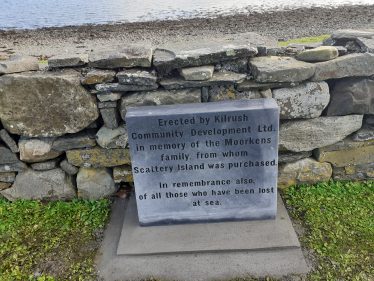